In recent years, booking or arrest photographs (mug shots) obtained from law enforcement websites have been reposted on commercial websites, some of which charge a fee to have the photographs removed. Some sites will remove photos at no cost for those who can show that charges were dropped or that they were found not guilty; others charge a fee. Once on the web, however, the photographs can be copied and redistributed by other sites, and individuals who had charges dropped or were found not guilty can find it difficult to repair their online reputations.

I’d like to examine the search engine as experience infrastructure– A sort of infinite-channel cable (it’s funny that I consider myself a digital native but still reach for a TV analogy) that can deliver personalized content that antagonizes and preys on its own audience as a business model… and it’s what we specifically request to see.

In a one-minute video I’d like to create something that is more about the gut level feeling of ‘connotation of guilt’ than the specifics of either real-life mugshots or the sites that publish them, implicating not just those sites but the state of the world-wide-web itself. This will likely take the form of an animation made using a custom-built webpage.

Litigation is transforming a lot of these sites into a wall-of-ridiculous-agreement-text that you ‘shouldn’t use the mugshots you find to deny people jobs or make judgments about them’, as if there is any other possible use for reproducing arrest photos of people. The sites that became high profile enough to start adding these agreements were the ones in danger of litigation, and they remain mainly to serve ads to take advantage of their remaining traffic. The photos that are posted are now distributed to dozens of offshore sites so that “reputation management” sites can charge to remove them. The costs involved in removing all of these images from search results can be considerable, even if Google has tweaked its search algorithm to push mugshots down in results (as reportedly happened in 2013)(Segal).

What adds to the power these sites wield is a cultural conditioning that influences the way we’ve come to perceive the mugshot. A fixture in law enforcement practices since the 19th century, mugshots soon gained ubiquity in crime reports published by newspapers, tabloids, and television, becoming “imbued with a connotation of guilt even though they are created prior to a person’s conviction,” researcher and journalist Mary Angela Bock and colleagues wrote in the journal Journalism Studies in 2016.

Black and Latinx people may feel pressure to reputation manage more vigilantly than others, especially since many mugshot sites no longer list charges associated with photos, charging through an additional service to view details, so bias can take over speculation on the cause of arrests. In some cases these sites leave names up with broken links to images, leaving a specter of suspicion (Yerak).

Search as infrastructure of experience has changed culture as radically as film and interactive media, it’s insinuated itself into the fabric of our daily lives, and on many levels it is both flawed and exploited in fundamental ways. A library search for ‘mugshot publishing’ brings up more pro mugshot removal public relations press releases than actual articles (alongside numerous “fugitive criminal sends police replacement mugshot” articles where people risk arrest to try to remove an unflattering photo) Searching for ‘mugshot publishing’ articles on journals-of-record websites includes injected ads for mugshot removal services.

A private company who’s primary reason for existing is to serve advertisements is ill-poised to serve as arbiter of all human knowledge and communication. The search engine- overflowing with press releases and advertisments, click bait and graveyards of auto-generated pages bloating the long-rotten carcass of the public web.

If we think of the internet as a public space, and therefore- as Adrian Piper suggests- a ‘political arena’, what can be said about the power relationship that’s occurring in the case of online mugshot publishing- between the public, search engines, and reputation scammers?

How does an image of an individual, captured by the state, commodified by obsfucated private business entities, reproducing virally, delivered by the privately owned search engine, that the signified must pay to destroy, encoded and decoded? 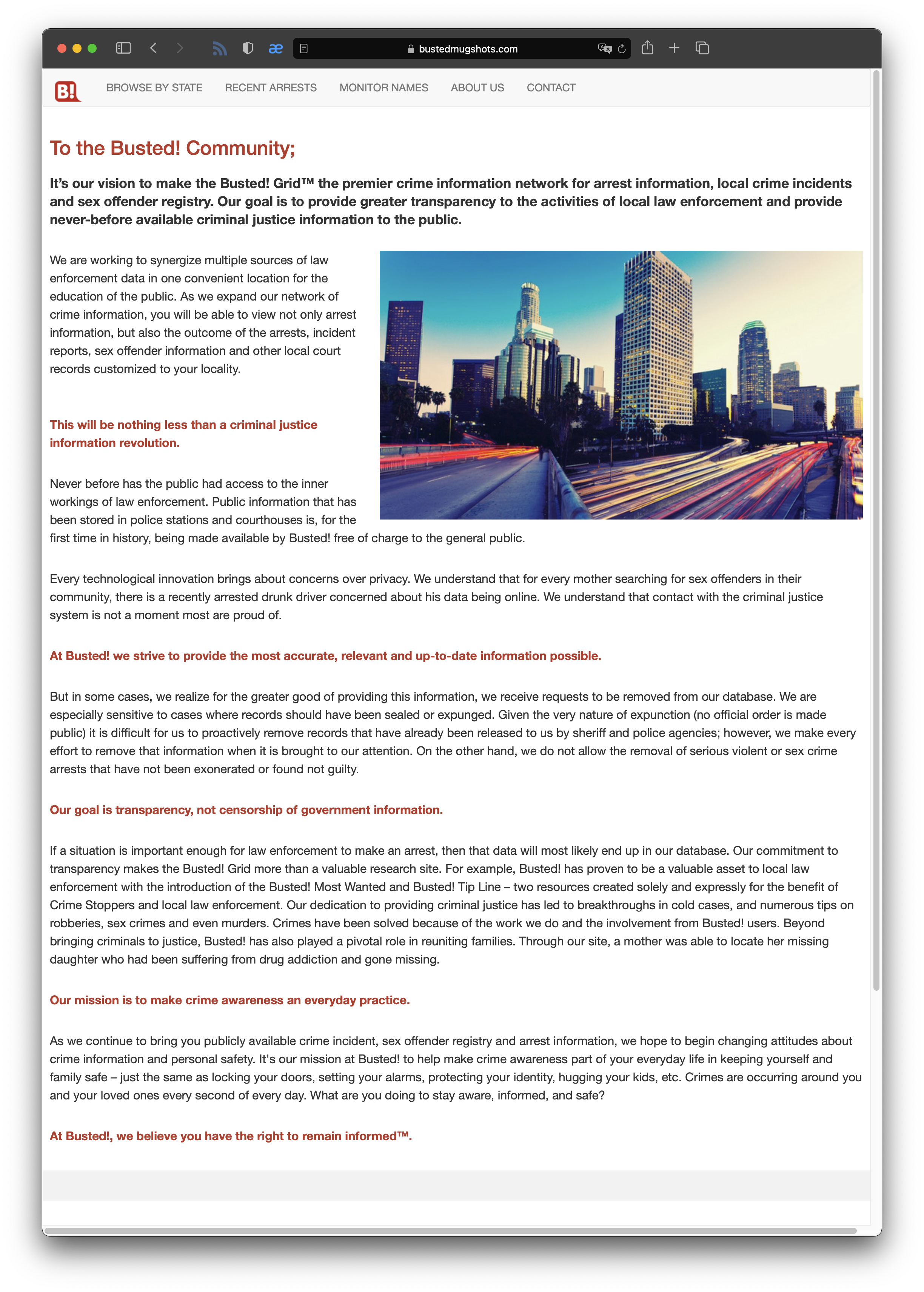 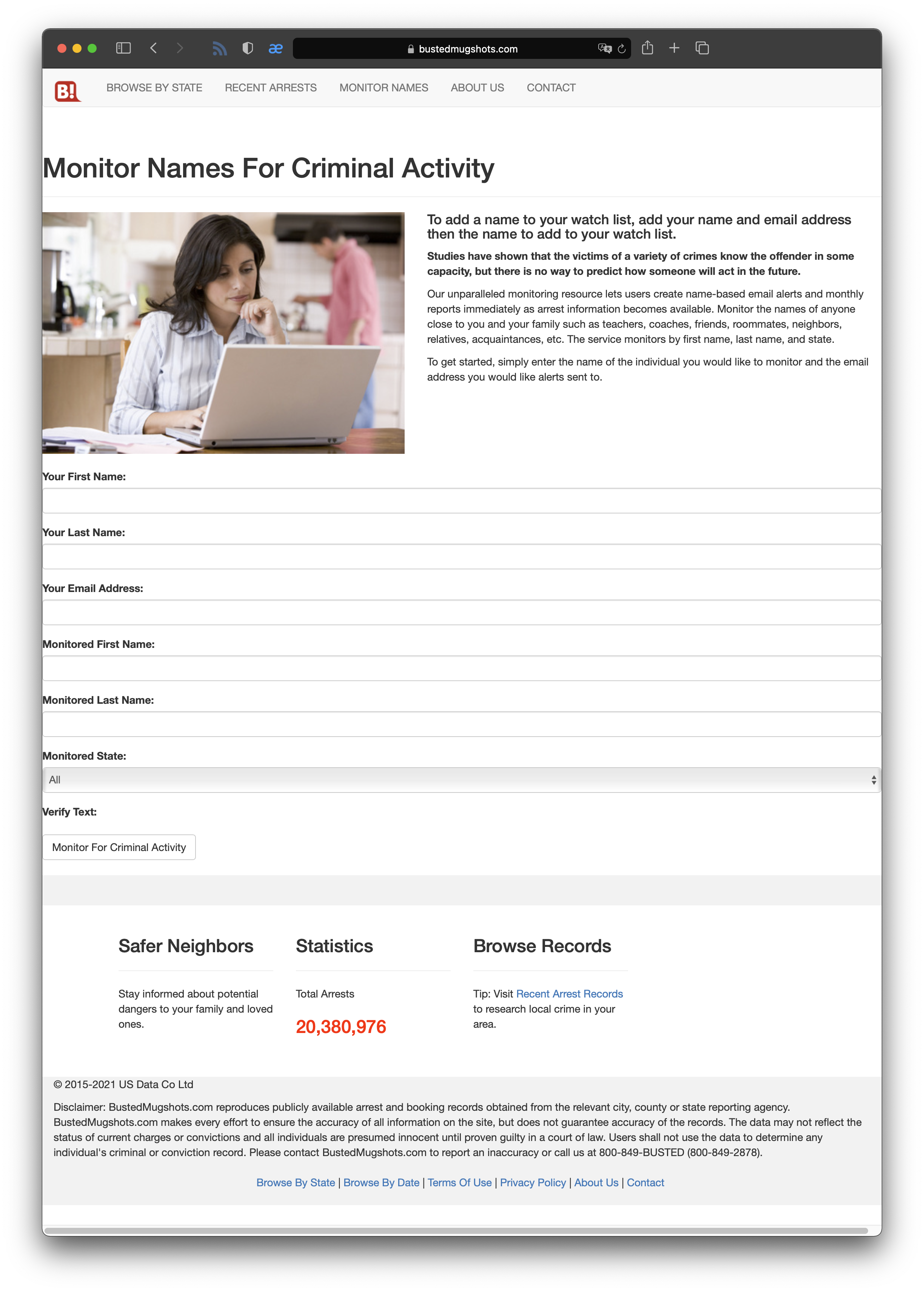 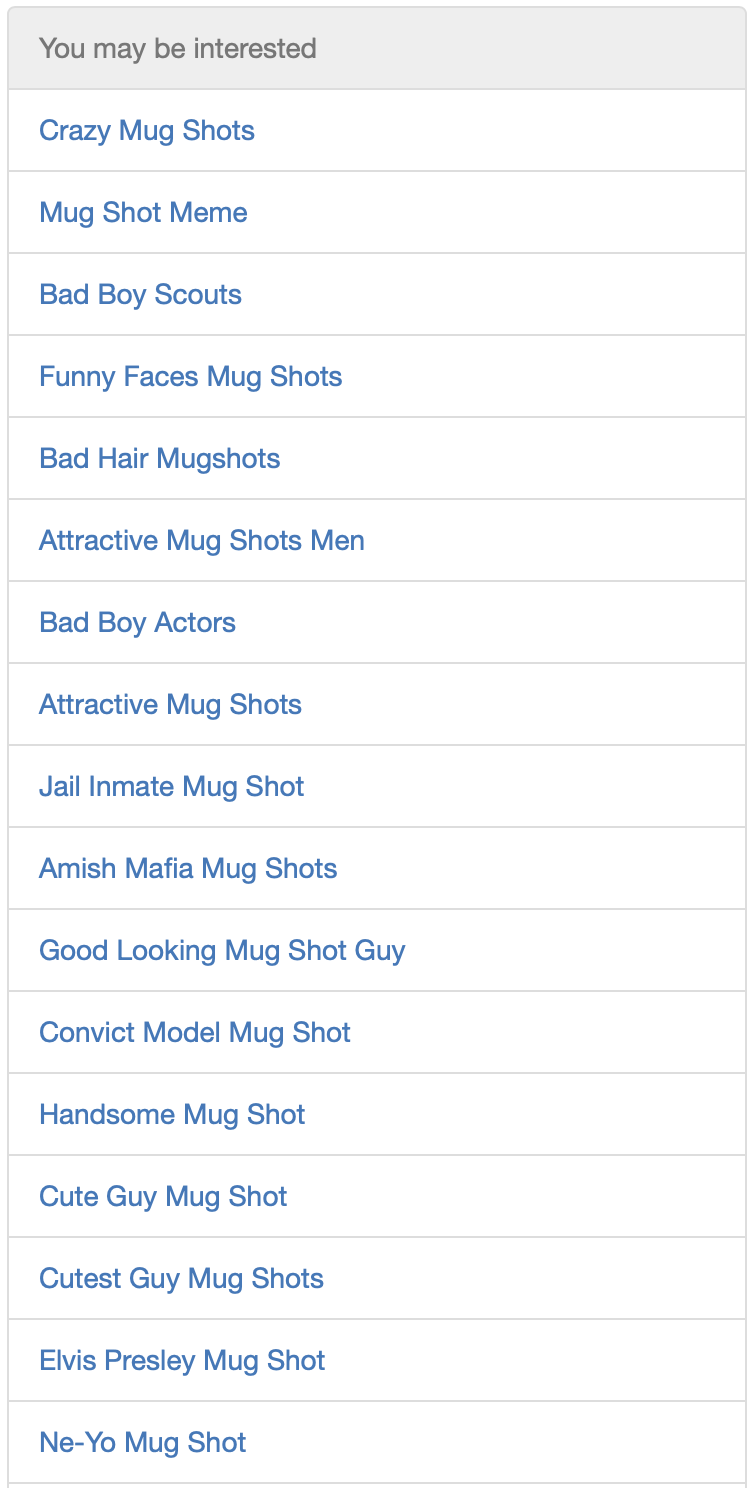 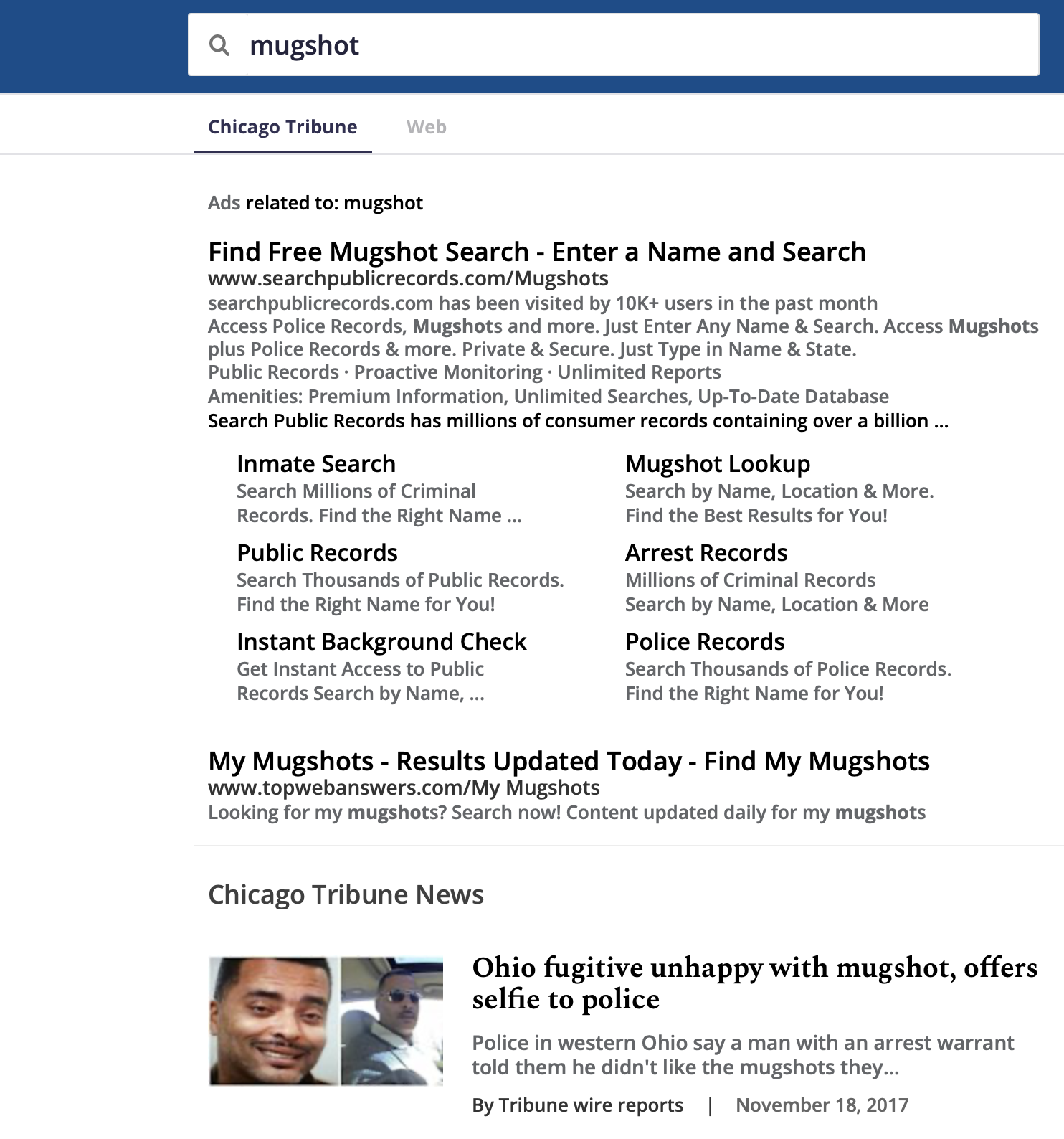 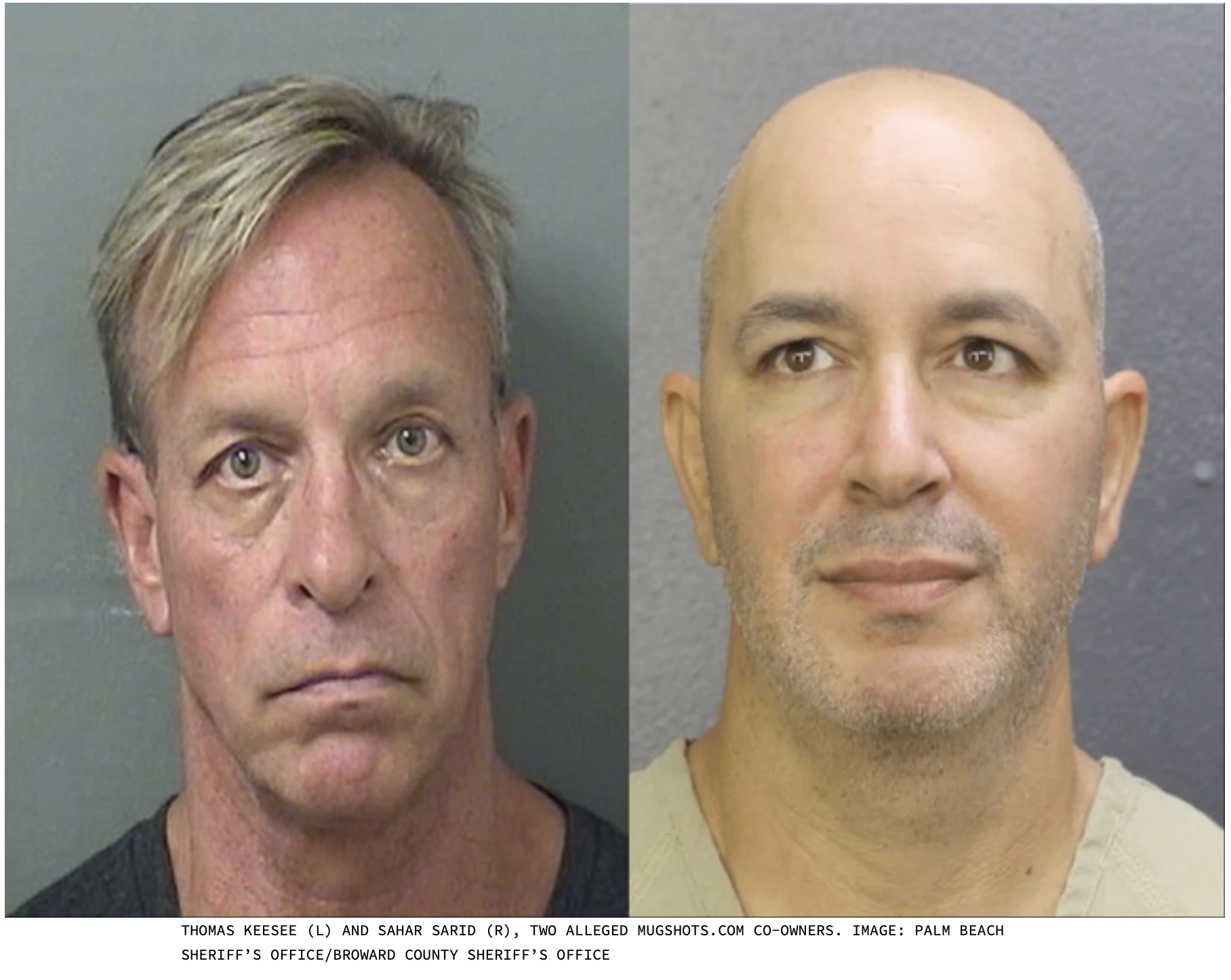 Search is also more than the specific mathematical algorithms and deep-machine learning developed by computer scientists and software engineers to index upward of a trillion pages of information and move some from the universal data pile to the first page of results on a computer screen. The interface on the screen presents an information reality, while the operations are rendered increasingly invisible. 36 The media and communications scholar Alex Galloway destabilizes the idea that digital technologies are transparent, benign windows or doors providing a view or path to somewhere and in themselves insignificant-the digital interface is a material reality structuring a discourse, embedded with historical relations, working often under the auspices of ludic capitalism, where a kind of playful engagement of labor is masked in vital digital media platforms such as Google.
Search does not merely present pages but structures knowledge, and the results retrieved in a commercial search engine create their own particular material reality.